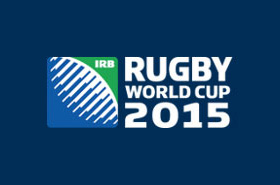 As rugby fans all over the world count down the last few hours to the start of the 2015 Rugby World Cup, the University is preparing to welcome the national Namibian team and Plymouth will host a number of special events celebrating the great game.

The Tournament kicks off at 8pm tonight with hosts England taking on Fiji at Twickenham Stadium following the official opening ceremony. The curtain-raiser will be shown live on the city centre Big Screen, along with all the home nation fixtures and action from the knockout stages.

Plymouth will be Namibia’s Team Base for the two fixtures at Exeter Chiefs’ home ground Sandy Park and players will be based primarily at the University of St Mark & St John. They will also have the option to use facilities at the Brickfields and the Plymouth Life Centre as well as a 3G pitch near HMS Drake, managed by the Royal Navy Rugby Union.

The 31-strong squad will arrive in the city next week and their first game, against Tonga, will take place on Tuesday 29 September. They will play Georgia on Wednesday 7 October.

Stan Cinnamond, Director of Sport at the University of St Mark & St John, said: “The University's Sport Centre is no stranger to international rugby stars, having welcomed New Zealand’s All Blacks and the Argentinian Teams to train here in the 1990s. We are perfectly positioned for elite athletes to make use of our state-of-the-art Sports Science Lab to raise their game, and are only too happy to welcome them on the University’s campus ahead of their competition on the global stage.”

Elaine Skilton, Team Services Pool Manager for England Rugby 2015, said: “With two matches at Exeter’s Sandy Park, Namibia will be looking to convert their Team Base in Plymouth into a stronghold during the tournament. The ‘Welwitschias’, as they are known, will be looking to win over the locals during their stay in the South West and will want a vocal backing when they run out at Sandy Park against Tonga and Georgia.”

The day after their first match, players will visit Plymstock Albion Oaks Rugby Football Club, where girls from secondary schools across Plymouth will take part in an under-13s and under-15s rugby festival. The event, organised by the Plymouth School Sports Partnership, will also include coaching workshops for the girls and school staff.

On Friday 2 October Plymouth City Council and the Royal Navy will host an official civic welcome for the team at Devonport Services Rugby Football Club. Royal Navy chefs will prepare traditional Namibian food, served by a front-of-house team made up of students from Plymouth Studio School – the first elite sport, leisure and tourism and hospitality event management studio school in the country – and apprentices from the Council.

Players will then head to Plymouth Albion Rugby Football Club for a Festival of Rugby on Monday 5 October. Hosted by Devon Rugby Football Union in partnership with Active Devon and the School Sports Partnership, the free drop-in event will be a chance for students aged 16 to 24 to have a go at different formats of the game in a fun, relaxed environment. The event will run from midday to 5pm.

This event and the festival at Plymstock Albion Oaks are part of a national Festival of Rugby organised by England Rugby 2015 and the Rugby Football Union. Rugby themed events are taking place across the UK as the nation prepares to celebrate what will be a massive year for the game. Visit www.festivalofrugby.com for more information.

Deputy Council Leader Peter Smith said: “It’s hugely exciting for Plymouth to be part of the Rugby World Cup and to be hosting the Namibian Team. We’re really looking forward to welcoming the players next week and celebrating the game with fans of all ages. Rugby is the real winner in the Tournament – it’s a chance to showcase the sport and get everyone involved, whether they’re watching the matches on the Big Screen, joining in with a taster session, developing their skills or returning to rugby in later life.”

Plymouth’s ‘Official Team Base’ status is the result of a consortium bid led by Plymouth City Council in partnership with the University of St Mark & St John, the Royal Navy Rugby Union, Plymouth Albion Rugby Football Cub and Everyone Active.