After a winter hampered by illness and injuries, Shachar Head was thankful to be back on the platform: “To be handed the victory in my weight category was the icing on the cake.”

Head’s opening lift was a squat of 140 kg. She then went on to hoist lifts of 150 kg and 160 kg in the British Universities and Colleges Powerlifting Championships.

160kg is equal to the weight of two men and a small child! Her 400kg total is a new record for the Great Britain Powerlifting Federation.

Stan Cinnamond, Director of Sport at Marjon Sport Centre, said: “We’re extremely proud of Shachar and Leah who understand that to push yourself further than you would normally go, not only will you feel stronger in the gym, you’ll be stronger in every aspect of your life.

“There’s something transformative about being able to do something in the gym that seemed impossible weeks before and once you realise achieving those milestones is possible, everything else in life seems possible.”

Fellow student Leah Clarke competed in the British University and College Weightlifting Championships in the women's +75kg category. In the run-up she was ranked third in the country. 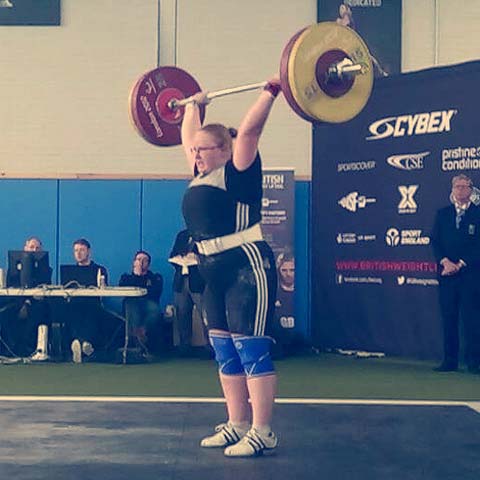 However, several weeks beforehand she sustained a fractured wrist, setting her training back, and leaving her nervous about the competition:

“In the hour before my warm-up, I sat reminding myself of all the technical points I needed to perfect, all the training hours I have put in over the last two years, and dwelled upon previous failures - which push me to achieve.

“In the warm-up room, things get really competitive; lifters eye each other up, try and psyche each other out.

“My coach said to me before I walked out for my first lift to ‘set the tone’. I began to feel some pain in my wrist.

“To win under so much pressure has been one of the best experiences in my sporting career, and raised my national ranking to second in Britain.

“It’s an exciting time to pursue my dream, but I’m also very committed to my academic work. I am in the final year of a BSc Honours Sports Therapy degree, and it’s great to be able to combine competitive sport with rehabilitation activities in the Sports Therapy clinic as it allows me to connect with other athletes.

“Weightlifting is often perceived as an activity that will make girls bulky, but you only need to look as far as lifters such as Lydia Valentin and Zoe Smith to see it’s not true.

“It’s empowering to find you can do something you initially felt defeated by. Weightlifting has been one of the biggest drivers, to help me overcome mental health difficulties and the loss of three very close friends in three months.

“I can honestly say that participating in sport and having a regular outlet for your emotions and frustrations is crucial in order to find happiness.”