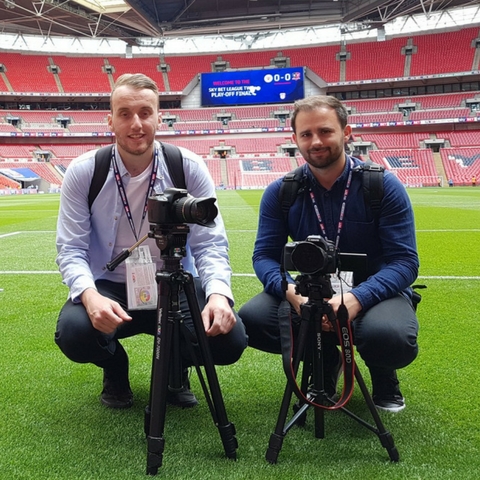 Sam, 22, admitted he is over the moon at landing the role of video editor for the Yorkshire club, just over a month after handing in his final piece of work as an undergraduate, beating off competition from hundreds of other applicants in the process.

“I didn’t think I’d be doing a job such as this straight away after uni – essentially I’ve got my dream job straight off the bat,” said Sam, from Barnstaple.

“I was pretty happy just to get an interview, to be honest, as they told me they had had hundreds of applicants from all over and I was the only recent graduate they interviewed.

“They just said they were really impressed with my interview, and I’d done everything I could to make myself stand out. When I got there they knew everything about me; all the work I’d done and all my content was on a page of A4 in front of the guy interviewing me.”

It completes quite a journey for Sam, who admitted that he wasn’t even sure if university was for him when he attended an open day at Marjon five years ago. He said: “It was probably the best decision I ever made, to be honest.

“I came and had a look around, and got really excited about the Jam Centre and the opportunities there were here. I just thought, ‘I can do this.’”

Sam was also quick to note the importance of work experience he gained in his second year at Marjon, and the crucial role played by Exeter City FC in helping him.

“Basically, the second year work experience module pushed me to apply the skills I was learning into a professional setting, and it has really helped me move on to the next step,” said Sam. “It’s about taking every opportunity that comes up.

“So, I did some work experience at City, which then turned into being at every home game for 18 months and being prepared to travel. If it wasn’t for Scott Palfrey (marketing manager) at Exeter I wouldn’t have had all that experience which has led to this.”

Sam’s task now is to concentrate on driving audience and web traffic to Huddersfield’s content channels – something he proved he could do at St James’ Park when one of his 360-degree goal videos went viral and has since had over 350,000 views.

And he admits it’s been hard not to look at the fixture list for the season ahead.

“We start away to Palace, but then it’s Newcastle at home, Spurs at the end of September, then Man United and Liverpool… Going behind the scenes at Old Trafford, the Etihad, Emirates is going to be really cool.”