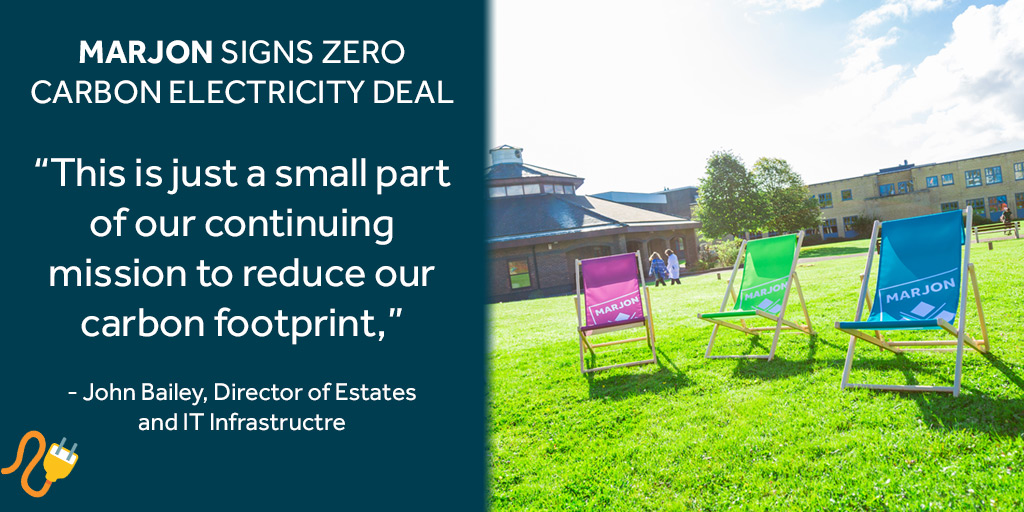 Plymouth Marjon University is delighted to announce a new zero carbon electricity supplier, with Ørsted set to provide on-campus electricity in a much greener way.

Starting from the 1st August, Marjon’s electricity supply will be exclusively provided from carbon neutral sources with the aim of dramatically reducing the University’s carbon footprint over the coming years. This is the first stage of Marjon’s fledgling Campus Development Plan, which will look at how the Marjon campus can develop in line with the future aims of the University.

As a small start to this ambitious project, Marjon had invited tenders from power companies but specified that 100% of all electricity had to come from a renewable energy source.

The Director of Estates and IT Infrastructure at Marjon, John Bailey, said he was pleased to sign on the dotted line with Ørsted.

“This is just a small part of our continuing mission to reduce our carbon footprint as a University and we’re going to have some really exciting plans going forward on new green initiatives.”

The news follows Plymouth City Council’s decision to declare a climate emergency and acts off the back of an international aim to keep global temperature rises below 1.5°C. In order to achieve that, global carbon emissions have to halve by 2030 and by 2050 the planet needs to be actively taking carbon out of the atmosphere.

“People are now becoming much more aware of the climate emergency,” said John, who previously worked at the University of London as the Head of Sustainability.

“Plymouth City Council officially declared a climate emergency, the David Attenborough documentary got a lot of people talking and Extinction Rebellion have also been vocal in wanting people to take action against climate change.

“The University has an ambition to reach zero carbon and we’re acting now by looking at our campus development strategy and trying to find practical ways we can achieve that aim.”

The new carbon neutral electrical supply is just one part of Marjon’s soon-to-be-launched ambitious Campus Development Plan, which aims to provide a blueprint as to how the campus can develop and grow in line with the long term aims of the University.

Marjon recently put out a notice for tenders on the Campus Development Plan, with architects and consultants being invited to identify the needs for the campus to develop in line with growth plans, while continuing to improve the University’s impact on the environment.

John continued: “This is a really big and exciting project for everyone here at Marjon. The Campus Development Plan looks at the long term vision for the site here. We’ll be looking at landscaping, the Halls of Residence and the campus as a whole.

“Although we have one of the most picturesque settings of a campus, I personally think our space has loads of unrealised potential and I can’t wait to see the developments in the coming years.”

Following the University’s most recently published accounts showing a 5% surplus, Marjon is continuing to look at ways of improving the student experience, with plans to develop the North side of the Quad currently being drawn up between McGregor Coxall and Will Sandy Design; that’s following a tender process which took place earlier this year.

“The Quad is probably the best outside space that we have here and the Student Hub is the best student-focussed indoor area. They’re right next to each other but they don’t interact together at all,” said John.

“The development on the North side of the Quad is about combining those two spaces so they work seamlessly together and it becomes a lot easier to walk from one to the other.

“The designs for the Quad are being put together over the Summer and we expect that come the Autumn we will put a tender out for completing the works.”

Interested in finding out more about life at Marjon? Our next Open Days are on Friday 7 and Saturday 8 June.

Applications are open now to study at Marjon in 2019.