New health study to be followed by BBC 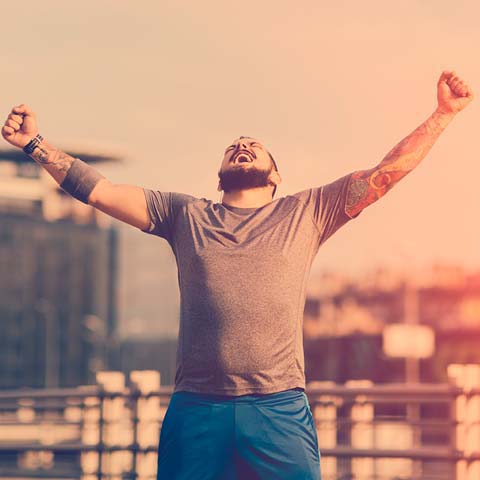 Due to be broadcast on BBC South West on Monday 19 December, the study takes people who are too breathless to exercise to see if they become more comfortable after breathing training.

The paticipants in a previous study could walk more comfortably for greater distances after carrying out twice-daily breathing exercises.

Research by UK and Australian scientists has shown that adults with a high BMI could walk 15% further after breathing into a hand-held respiratory trainer for a few minutes each day over four weeks.

The study was led by University of St Mark & St John in Plymouth. It found that adults who used a handheld breathing trainer daily for four weeks could walk 60 metres more in a six minute test than those who did not.

The research team hopes that health professionals will recognise the potential for the device to help people who feel unable to start exercising because of obesity-related breathing difficulties. People who are overweight or obese often suffer shortness of breath due to excess fat in and around the chest which impedes breathing. Shallow, inadequate breathing is common in people with obesity and this makes exercise more difficult. Lack of exercise further weakens the respiratory muscles meaning that obesity and inactivity combine to create a substantial problem.

The handheld respiratory trainer used in this study looks like an asthma inhaler and is popular with athletes, who want to improve their performances, as well as with people with conditions such as chronic obstructive pulmonary disease. This is the first research to assess its benefits for obese people who experience breathlessness. It works by strengthening the intercostal muscles between the ribs, the neck muscles and aids the action of the diaphragm.

Professor Andrew Edwards of the University of St Mark and St John, said: “The results of our study are very exciting. The individuals who used the handheld breathing device for just a few minutes twice a day were able to walk considerably further than they had previously, without exerting any more effort.

“Many people who are obese find themselves in an impossible situation: they know they need to exercise to lose weight, but they feel unable to exercise because of breathing difficulties. These simple exercises – which can be done just sitting at home – could alleviate symptoms that often prove a significant barrier to participating in exercise. I hope health professionals will see the potential for this approach to be part of the support and advice available to help people get on the road to losing weight.”

In this study, 67 men and women with an average BMI of 36 were split into two groups. After being timed walking for six minutes, each participant was given a hand-held respiratory training device. The training group’s device was on the maximum setting, while the placebo group’s was on  a lower setting. All the volunteers were instructed to carry out 30 deep breaths into the device twice a day and after four weeks, they were again timed walking for six minutes. While the placebo group saw little change in the distance they covered in six minutes, the other group achieved an average increase of 60 metres.

The Plymouth-based scientists are now extending their research to see if long-term usage delivers even more benefits, such as more comfortable breathing during sleep and also the use of breathing training alongside exercise training.