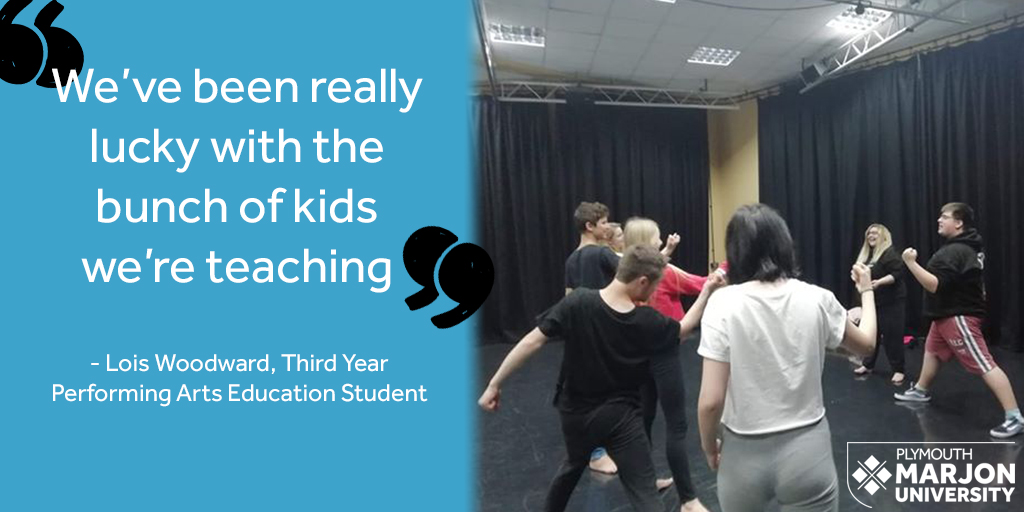 Two of Plymouth Marjon University’s Performing Arts Education students are making waves in the drama scene in Plymouth, thanks to the creation of the Chameleon Project; a free scheme which aims to help teenage pupils develop their performance skills.

Lois Woodward and Ashley Chinn are both in the third year of their degree at Marjon and developed the Chameleon Project as part of their studies at University.

Working together, Lois and Ashley are currently part-way through a 15-week project where students from around Plymouth visit the Marjon Arts Centre and learn new performance skills, whether that’s in acting, dance or drama.

In a key difference to other performing arts companies, much of the content in the sessions is led by the students who attend. It presents a unique challenge for Lois and Ashley, as they constantly develop plans based around the students’ interests.

“Every week we take on board what the students say and cater the following session to what they’ve asked to learn about or try.

“Some people think that giving the students free reign on content is a terrifying idea but, because they’re so passionate about performing arts, all of their ideas have been fantastic. We’ve been really lucky with the bunch of kids we have.”

As with any new performing arts group, there was some nervousness from the fledgling group of students at first, but both Lois and Ashley have enjoyed watching their cohort develop since the launch of the project in January.

Ashley said: “When they first came in they all seemed quite shy but as the weeks have gone on we’ve seen them get more and more in to it and lose that nervous energy. They’re putting their own spin on things now and really enjoying it. They’re learning together and opening up about what they can do when it comes to performance.”

Thanks to the success of the project, Lois and Ashley have been encouraged by their students to extend the scheme beyond the initially-planned 15-week period, and with Marjon allowing continued use of the performance workshop space to the soon-to-be graduates, the pair are looking in to options to extend the classes.

“We do the sessions on Monday nights - and no one likes a Monday - but the students said it gets them through the school day because they know they’ve got the Chameleon Project in the evening,” said Lois.

“The success and feedback we’ve had from kids has been so great that we’re looking at what we can do with the Chameleon Project going forward. There are loads of possibilities and hopefully we can sort something out in the near future.”

Ashley, who also runs Act1 Youth Theatre in Cornwall, is enjoying an especially fruitful month as he has already gained employment for when he completes his degree at Marjon. Ashley will be working for Plymouth City Council as a Music Tutor; going in to schools and providing expert tuition on a range of instruments to children.

“I’ve always known I didn’t want to complete this degree and go in to teaching in mainstream education but what’s great about this course is that I’ve been able to explore being an educator without necessarily being tied to one school,” said Ashley.

“There’s always that chance to make connections with visiting lecturers and learn more about what they do, and it’s not always from a straight school perspective. With the relationships we gain through the course it’s nice to explore different career paths and I’ve been able to do that during my studies.”

Meanwhile, Lois is exploring PGCE options with a view to becoming a drama teacher in a secondary school.

“The course has given me the ability to look at performing arts and be active within it,” said Lois.

“We’ve done modules on music, dance and drama and on the education side I’ve learnt about theories which has helped prepare me for becoming the kind of teacher I’d like to be in the future.”

Interested in studying Performing Arts Education at Marjon? Check out the course page.

Want to find out what it’s like to study at Marjon? Register now for our next Open Day.