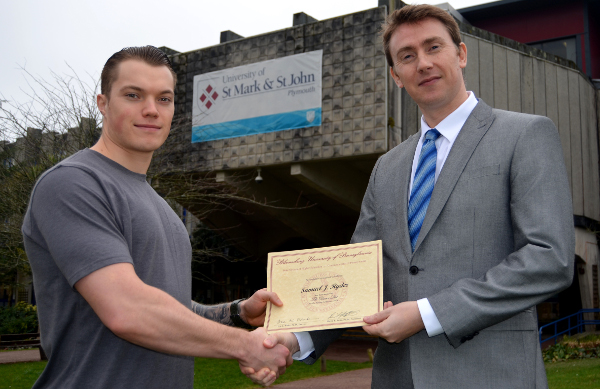 Sam Ryder, 25, an ex-Royal Marine and student, is researching the psychological hardiness of Royal Marines as part of his studies.

After leaving the armed forces, Sam chose the University of St Mark & St John because of its reputation for providing military personnel with bespoke study programmes.

He became interested in the psychology new recruits, particularly the attributes needed to get through the often gruelling basic training.

He said: “There is a greater focus upon the physical aspects of training to become a Royal Marine Commando, however my research is directed more towards the psychological resilience needed to be successful through training and service as a trained rank.

“I’m interested in what gives people that psychological edge to succeed, so I’m conducting focus groups to find out what advice can be given to new recruits to help them.

“A focus on strong relationships, family support and group social activities, all play a big part.”

He’s inviting ex-colleagues to feed into the research, adding “It’s great to be at a University where I am able to maintain contact with the men I served with, for example my former Sergeant Major and Troop Sergeant are also studying here to progress their own careers.”

He added: “I couldn’t have got this far without the help of one of my tutors, Helen Heywood, Academic Skills Co-ordinator, who has been an absolute star in helping me.

“She sat me down and helped me to learn to write critically and since then I’ve started to achieve respectable grades and made the Dean’s List in America.”

Sam was amongst the highest grades in his class during an international exchange with Bloomsburg University in Pennsylvania where he spent six months.

He is studying BSc (Hons) Health Exercise and Physical Activity.

Find out more about Armed Forces courses at the University, or register to attend one of our Open Days.