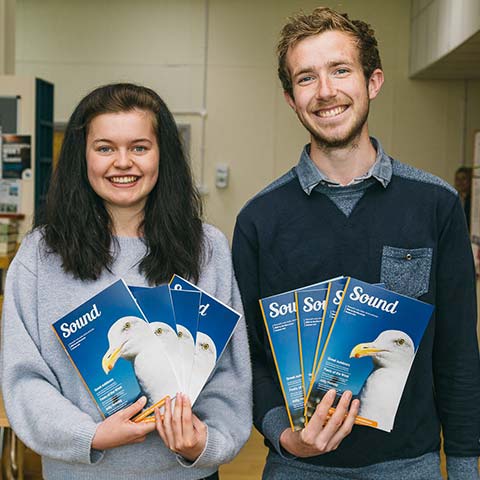 Talented journalism students from Plymouth Marjon University have just produced a second issue of free lifestyle and listings magazine Sound which celebrates all the great events and places to go in the city this summer.

Writing features and news for Sound is part of a second year module taken by Journalism, Sports Journalism and Creative Writing students and follows the successful launch of the magazine last May.

Students pitched and wrote features about major events such as MTV Crashes, Flavour Fest, Royal William Yard Festival and Armed Forces Day happening in the city.  They also covered attractions such as Adrenalin, Dartmoor Zoo and even tried out Slacklining in Central Park.

Plymouth’s major sports teams, such as Argyle, Raiders and Albion are featured in Sound as well as lesser known clubs in the city. And some students chose to write about food and drink by sniffing out some of Plymouth’s hidden gems.

Lecturer in Journalism and Media, Liz Miller, said: “This is a fantastic opportunity for students to go through the process of pitching and producing news and features and then see their words in print. Despite the move to digital platforms, nothing can match seeing your work with a by-line in a beautifully produced magazine.”

Sound is available around the city in major tourist areas and key attractions, such as Plymouth Tourism Office, The Aquarium, Theatre Royal, Plymouth Pavilions, Barbican Theatre and the Arts Centre.

Find out more about studying Journalism by coming to our Open Day on 10 June.