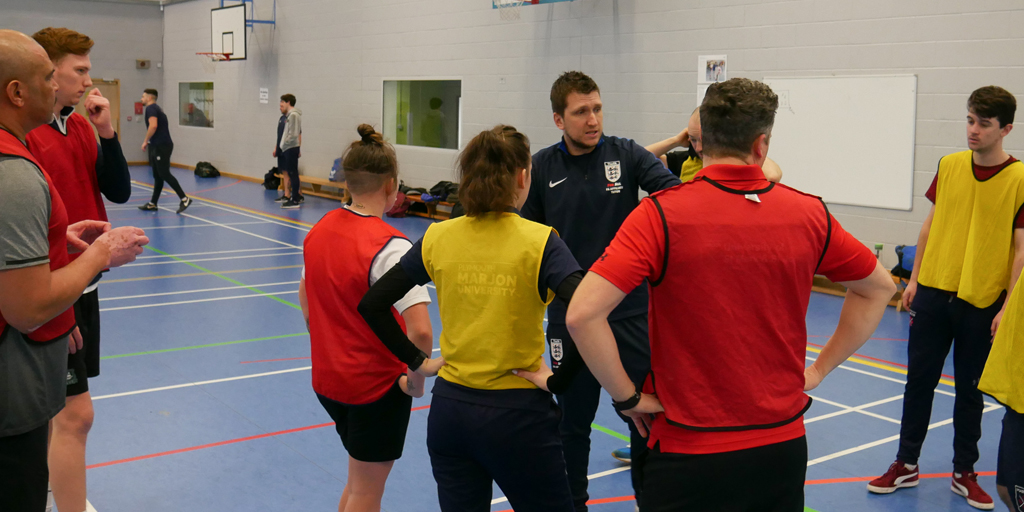 Students gained an understanding of techniques and skills related to the small-sided version of football and in doing so enhanced their CV with another coaching qualification. Students on the University’s Sport Development and Football Development & Coaching programmes gained the FA-accredited qualification as part of their studies, while other Marjon students also got the chance to bolster their CV by attending this one-day event.

The session was delivered by Marjon graduate and current County Development Manager at the Devon FA, Chris French. Charged with overseeing small-sided football and futsal across the county, Chris was pleased to deliver the session at Marjon.

“As part of their programmes here, the students undergo a number of coaching courses which goes through from Level One Football through to learning how to coach disabled footballers,” said Chris.

“This one-day course gives the students an opportunity for personal development and is also something they can put back in to the community when they’re out coaching. We’ve got a lot of students here from the sports courses but there are also people here from teaching as well as journalism that are looking at opportunities to be coaches in their local communities.”

As a former student at Marjon, Chris knows how tough getting a job in the football industry can be, but he believes extra qualifications as part of university studies can play a big role in gaining future employment.

Chris continued: “As a former student who went through a degree programme at Marjon, I have managed to work my way up at the Devon FA and I am very aware of how important it is for these young people to be out there working in the community and adding extra things to their CV.”

“As an employer I want to look at what students do on top of their studies at university. By doing this here at Marjon today we’re giving people in sport with a passion for football the opportunity to add great things to their CV.”

Students on the course learnt skills around the rules and development of futsal as well as learning coaching techniques around the only UEFA and FIFA approved small-sided format of the game.

Ryan Thomas, a Senior Lecturer across Marjon’s sports programmes, was delighted with the impact the day had on his fledgling students.

“The free coaching sessions that we have as part of the degree is really important because, first and foremost, it’s a good deal for the students,” said Ryan.

“Students don’t have to go and find funds to study outside of the degree; it’s all in-built as part of the programme. It also means students can use the qualifications they earn whilst they study. They’re able to go out in to football clubs and find work before they graduate.

“Getting this futsal qualification today means our students can go off in to the industry with some really good ideas for unique sessions in their back pocket and an accredited qualification they can use and give to those industry providers and say, ‘I’m ready to coach’. Many of the students will be doing a placement module next year and having this extra qualification should help open some doors for them.”

Marjon’s Football Development and Coaching degree works closely with partners Plymouth Argyle Community Sports Trust, giving students the chance to learn from both academic staff at the University and industry professionals who have a wealth of experience in football.

Ryan believes the continued influence of Argyle’s Community Sports Trust can help give Marjon students the edge when looking for employment after graduation.

“The link with Argyle is fantastic because it means our students can build networks while they’re on the degree,” said Ryan.

“Instead of studying on the course and then making contacts they can take part in that process during their studies. They’re constantly building up a network of contacts they can utilise upon graduation. It also means they can hit the ground running as soon as they graduate because they’ve already been exposed to all the things that they’re likely to encounter out there in the real world.”

Want to study a sports-related degree at Marjon in 2019? Find the right course for you.